Prestigious French language school in the historic center of Paris

French School is 2 minutes walking distance from the Sorbonne, the Pantheon, and the Luxembourg garden, in one of the city's liveliest and most culturally active neighbourhoods.

Balzac, Jean-Paul Sartre, Jacques Prévert, Serge Gainsbourg, and many great artists and thinkers are linked to the beautiful and unique Quartier Latin.

France Langue IH Paris is a protected historic building used in the 19th century by Paris University during Napoleon Bonaparte's great reform of the French University. 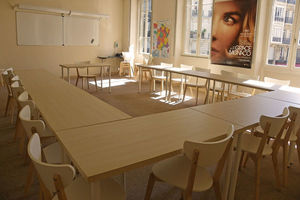 SUMMER STANDARD student residence located a few minutes away from the Latin Quarter, the Sorbonne and the Pantheon.